‘the loveliest house in the world’ 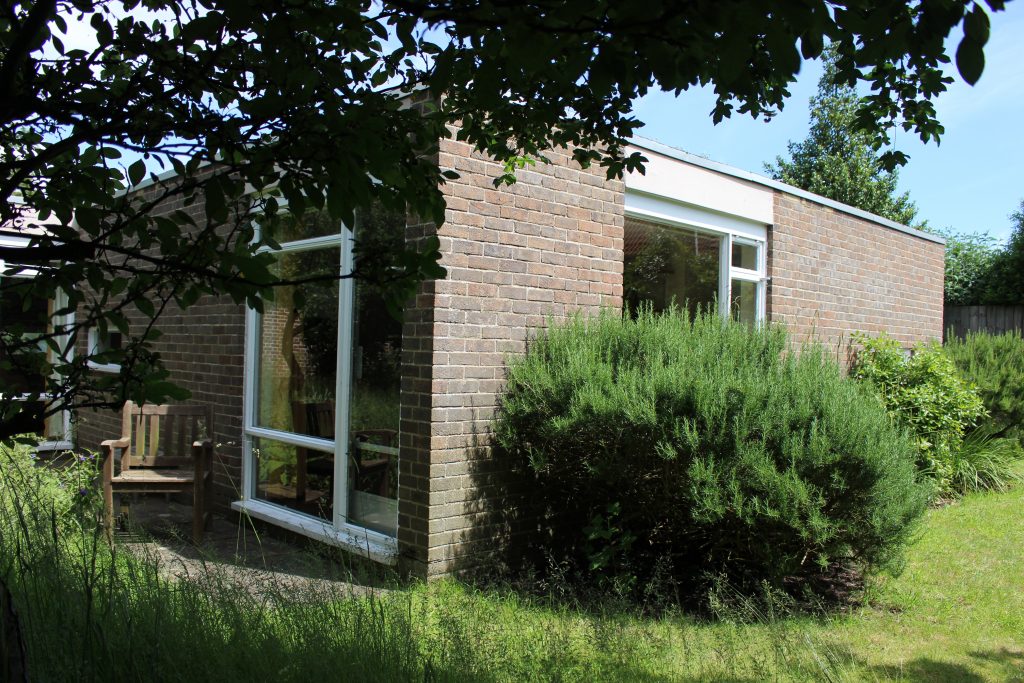 Imogen Holst’s bungalow was designed and built for her by modernist architect HT (‘Jim’) Cadbury-Brown in a corner of his garden, reflecting the architect’s own Japanese influenced house opposite. Imogen moved from a flat in Aldeburgh High Street to Church Walk in September 1962. She paid her ‘peppercorn rent’ to the Cadbury-Browns each year in the form of wine, a book written by her or tickets to the Aldeburgh Festival, delivered with an effusive note of gratitude for her ‘most wonderful house’. Imogen cherished her home and remained there for the rest of her life. 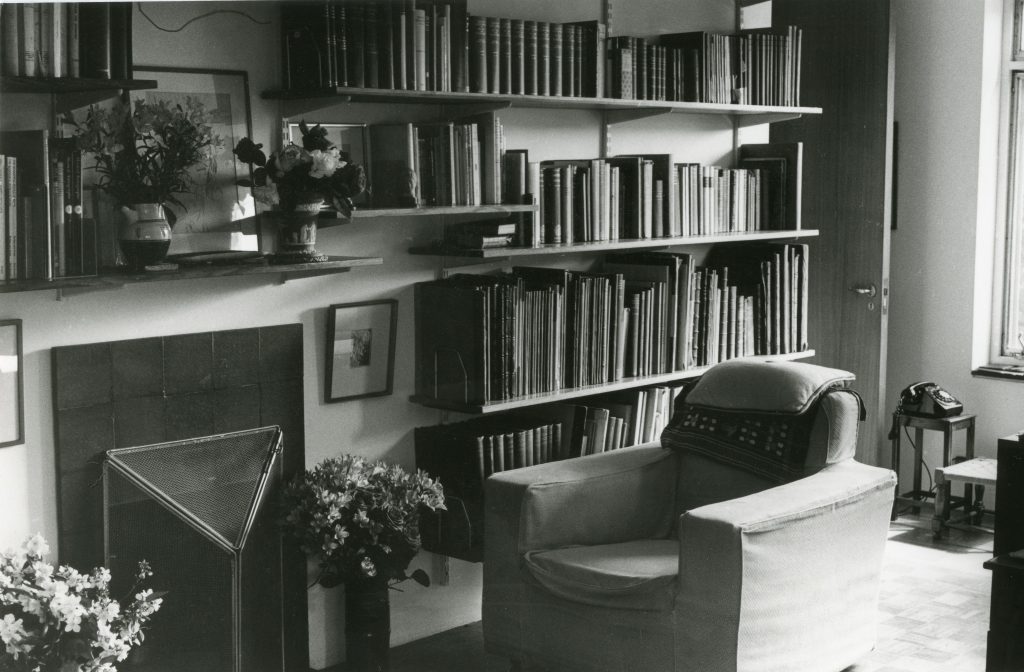 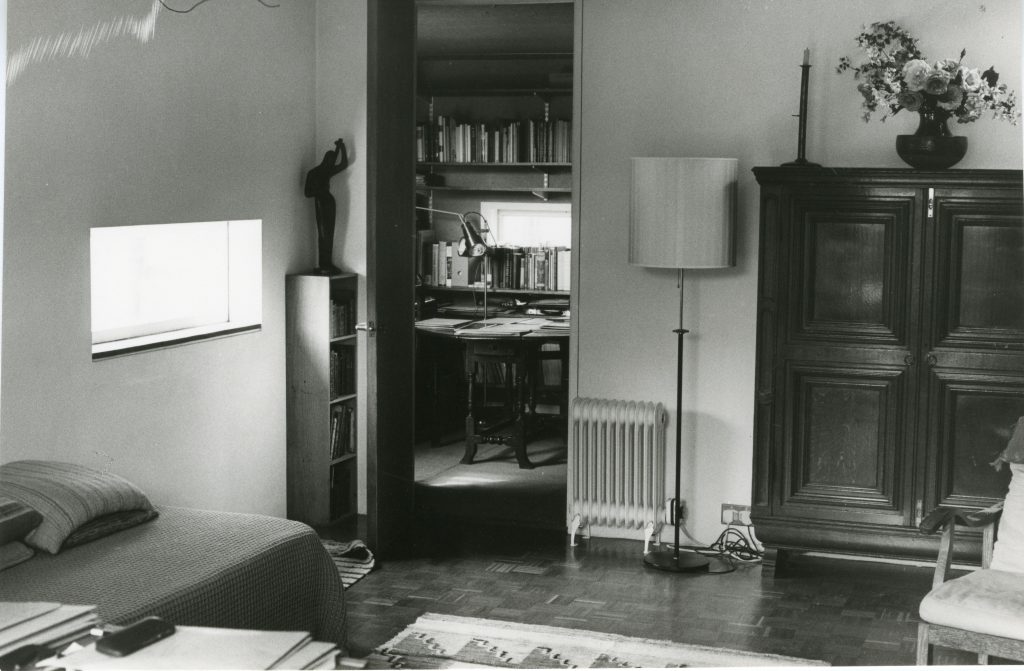 ‘The Holst house had to be built cheaply, but there is no marked contrast between the character of the well-funded [Cadbury-Brown house] and the low-budget house. Each is designed in relation to its garden, with light a palpable element of the architecture’. Diana Rowntree, The Guardian, 2009.

The bungalow was comfortably if sparsely furnished but packed full with Imogen’s music manuscripts, printed music, books and papers which now form part of the archive housed at The Britten-Pears Foundation archive. 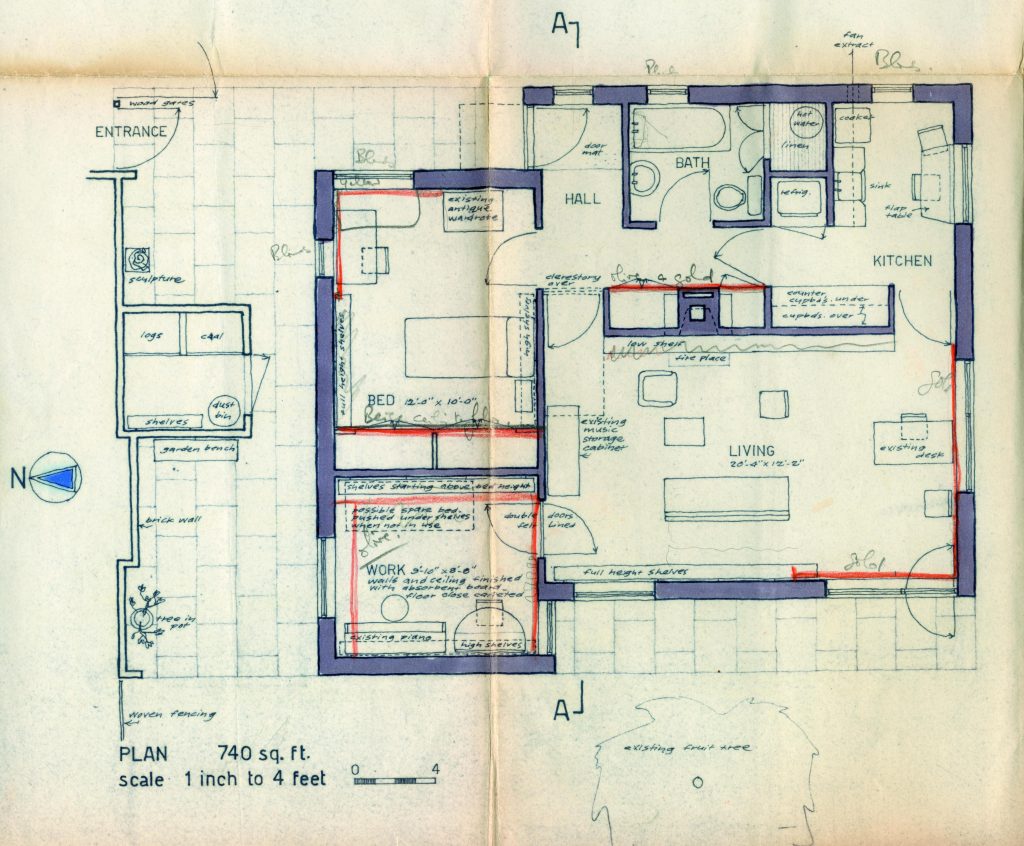 Plan of 9 Church Walk by Cadbury-Brown 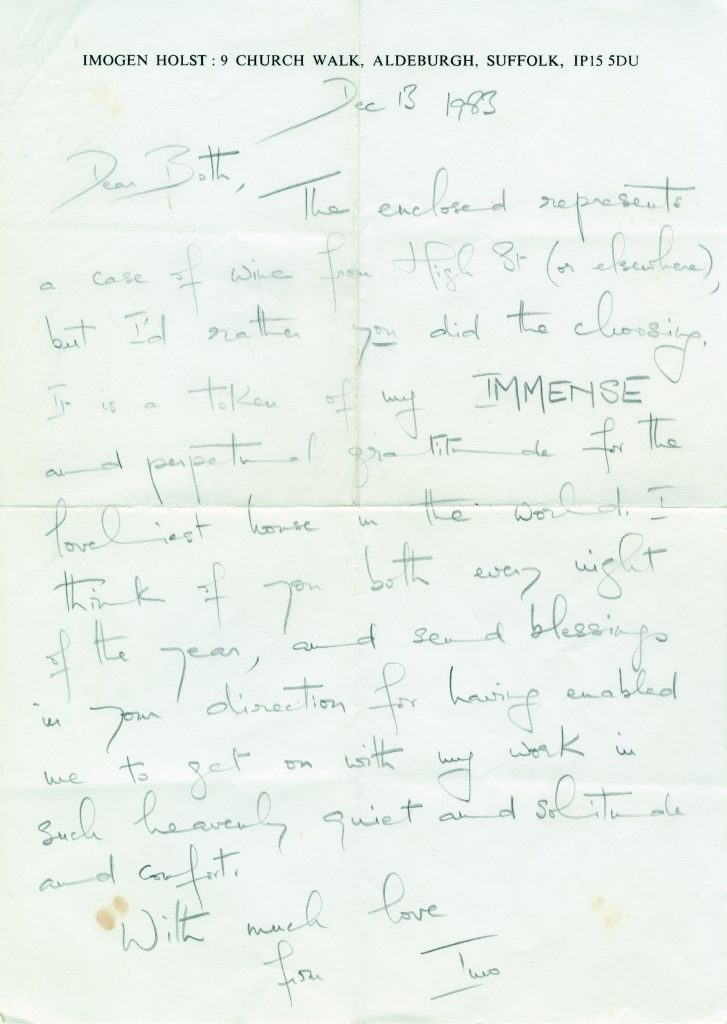 Letter from Imogen to the Cadbury-Browns 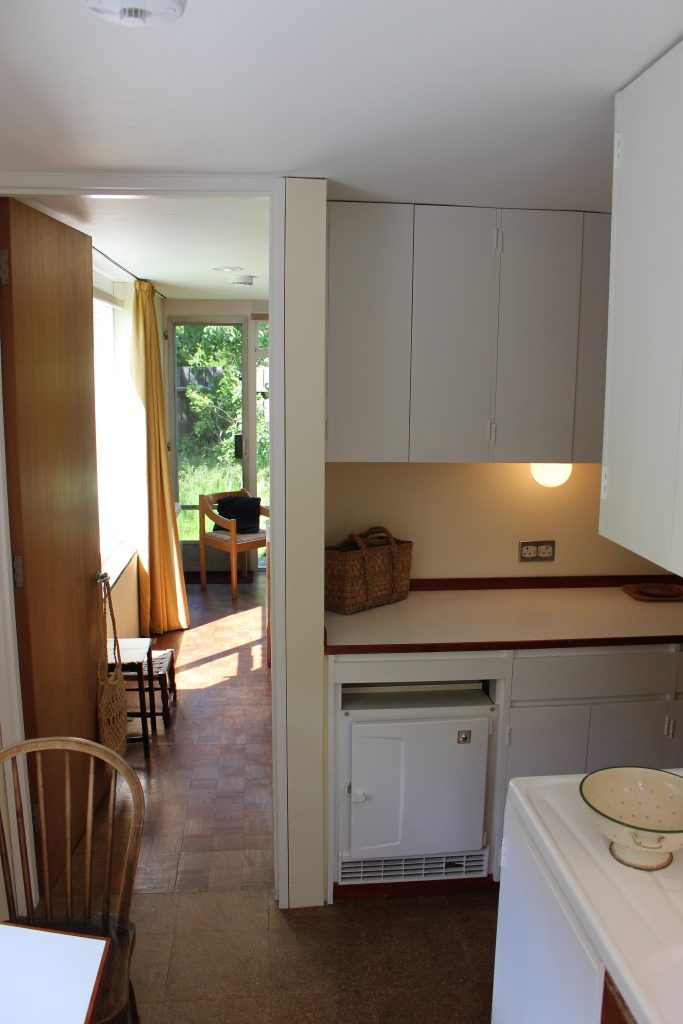 Imogen famously could only cook eggs. In 1960, one of her closest friends, Winsome Bartlett, whom she had met whilst teaching at Dartington Hall, sent her a new egg whisk for her birthday. In her letter of thanks, Imogen wrote that the present would ‘transform all my leaden omelettes into the sort I’ve always longed to make’. 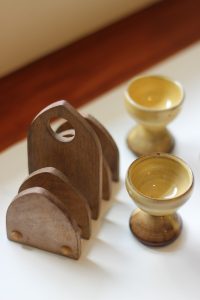 The kitchen is furnished with a flap table which was part of Cadbury-Brown’s original design. 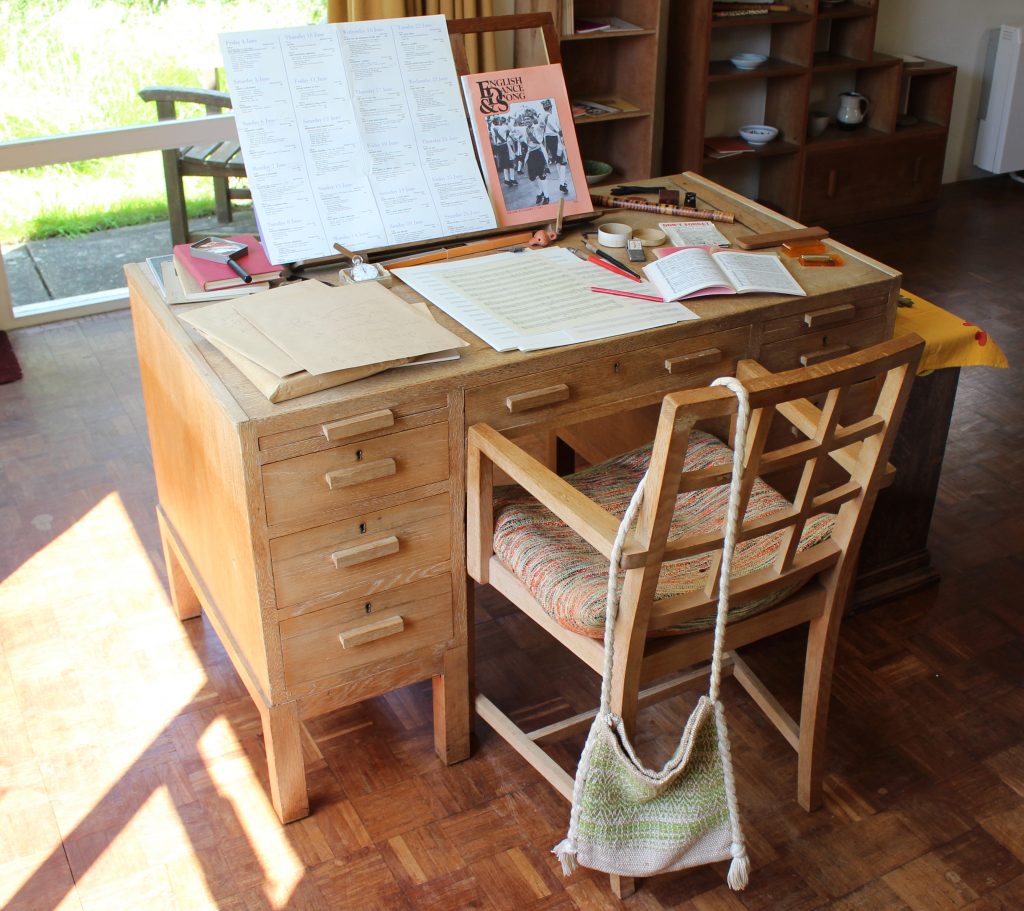 With her desk positioned by the window, Imogen had plenty of light to work on her compositions and writings. Imogen put aside her own composing during her time as Britten’s music assistant, however in 1964 she ceased working for Britten in order to concentrate on editing and promoting her father’s music. She also returned to original compositions: amongst the many works she wrote here are Deben Calendar for Woodbridge Orchestral Society in 1977 and String Quintet for the Cricklade Festival in 1982.

The room has floor-to-ceiling doors, no skirtings and an angled skylight bringing daylight into the centre of the house: features that are also in the Cadbury-Brown house. There are also floor length curtains with curtain rails set into the ceiling: a feature Cadbury-Brown also used when designing Britten’s Studio at The Red House.

There is Gustav Holst’s oak music cupboard made for him when he taught at St Paul’s Girls’ School. Imogen continued to use it to store her father’s music manuscripts. 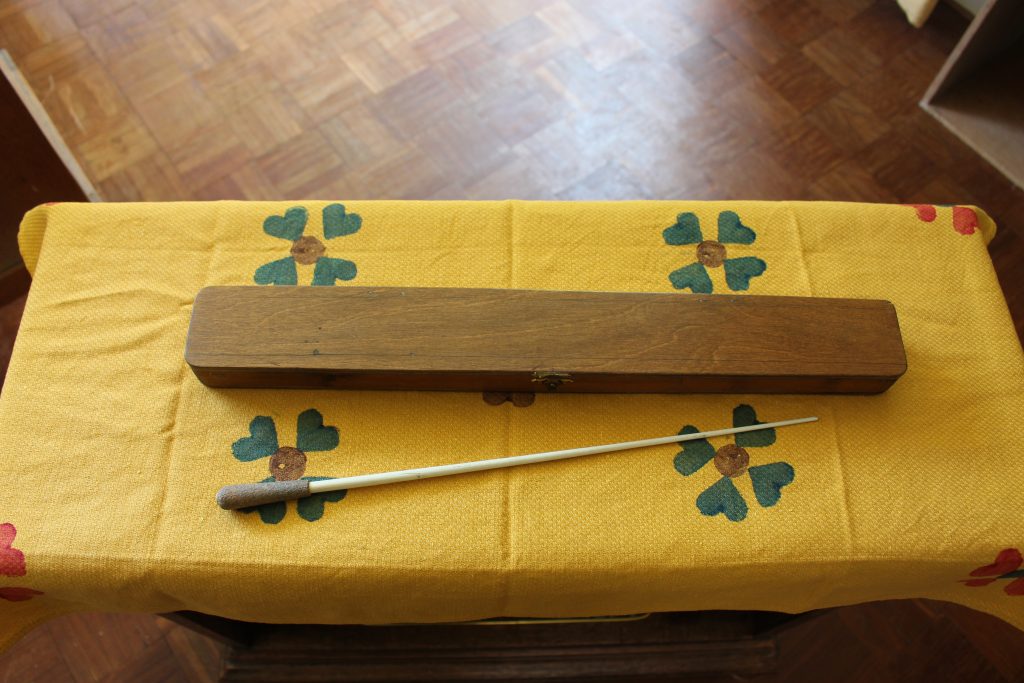 Imogen’s conducting baton. Imogen was a skilled conductor and often took to the podium during the Aldeburgh Festival. Composer and Imogen’s friend, Colin Matthews, observed ‘Anyone could have told at a glance that she had been a dancer, and still was. Her conducting… was a joy to watch – the same dance-like movements, and rhythm – rhythm was everything’. 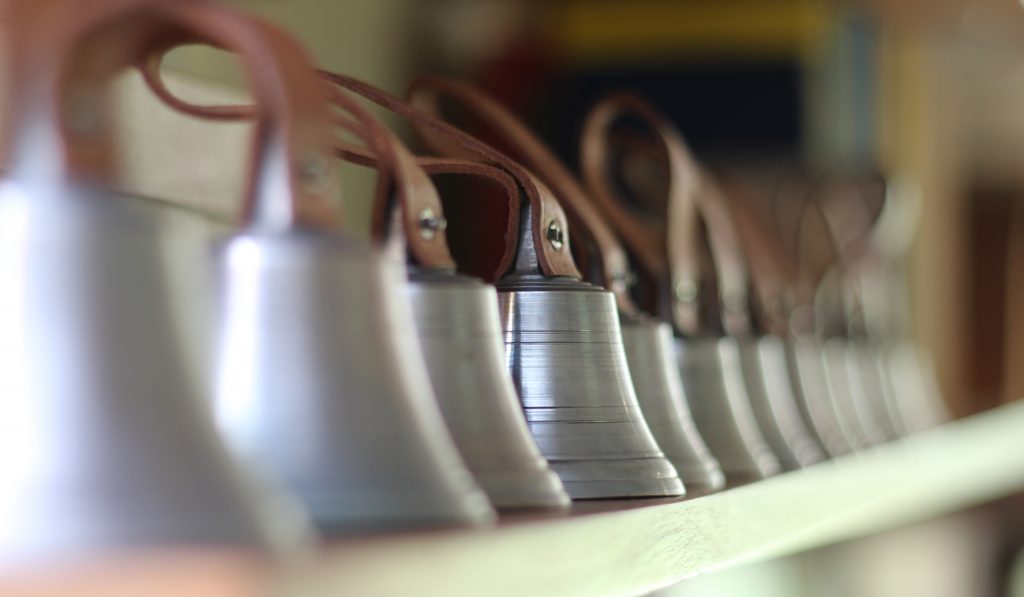 Recorders and handbells. Imogen arranged many pieces for recorder and composed works for handbells including Badingham Chime in 1969 and February Welcome in 1980, first performed by local children in Badingham and Aldeburgh Churches respectively. Imogen’s enthusiasm for working with amateur singers and players made her a much-loved part of the Suffolk music scene. 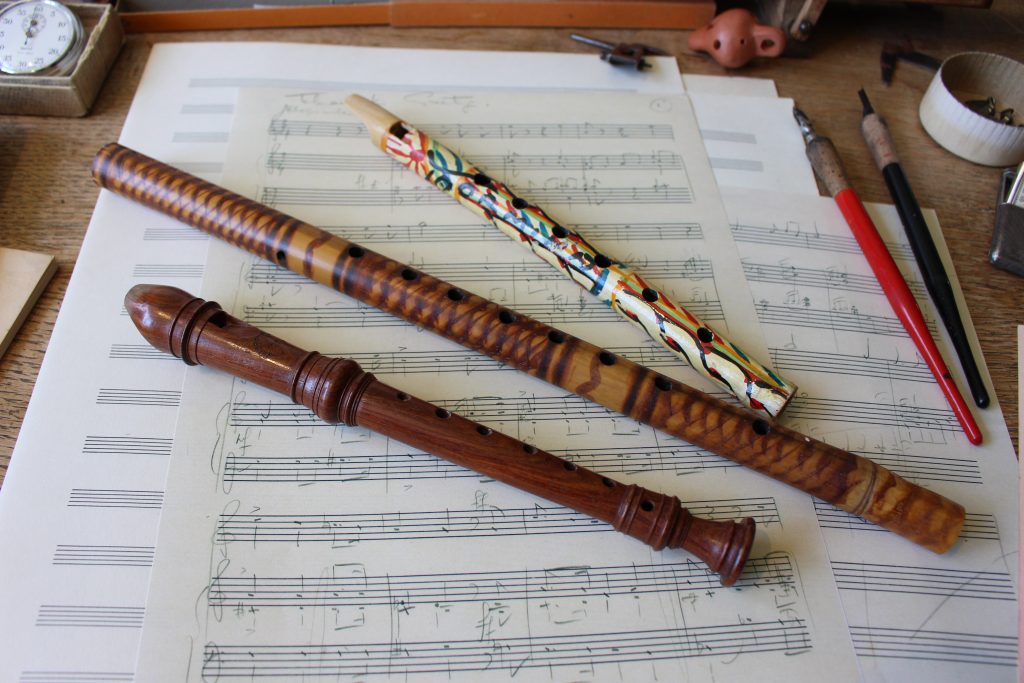 ‘By great good fortune, four of us were chosen by Imogen Holst to help her with some scores. We spent the morning in her delightful bungalow up near the Parish Church, earnestly rubbing out all the pencil marks in various scores. Imogen kept us supplied with biscuits and orange juice, and chatted away to all of us like our dearest friend! – she is such a lovely character. And we all got one of her music books for children, signed with a ‘thank you’.  Hazel Fehr, Hesse student 1964, in Wake-Walker, Time and Concord. 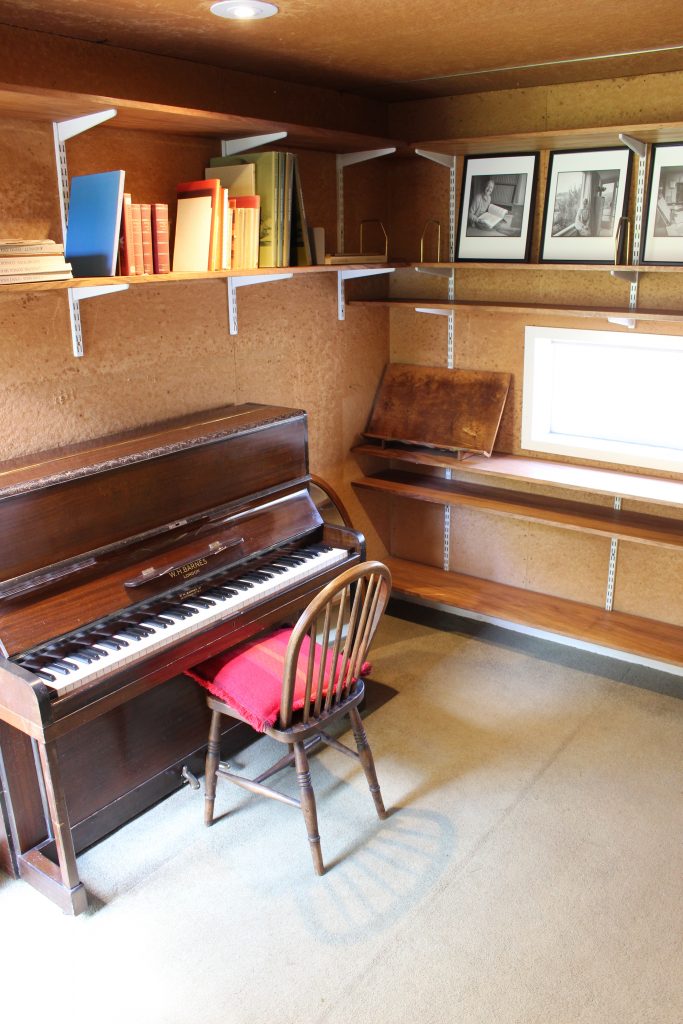 Imogen, concerned not to disturb her neighbours with her passion for listening to Indian music, had this room soundproofed with absorbent board and felt lined double doors. She raised the question with Cadbury-Brown whether sound would escape from the junction of the opening portion of the window and asked for the submitted plans to be altered accordingly. Consequently at their meeting in September 1962 Aldeburgh Public Health and Planning Committee discussed the question of whether fixing the double glazed window to achieve effective sound proofing would risk suffocating the occupant! 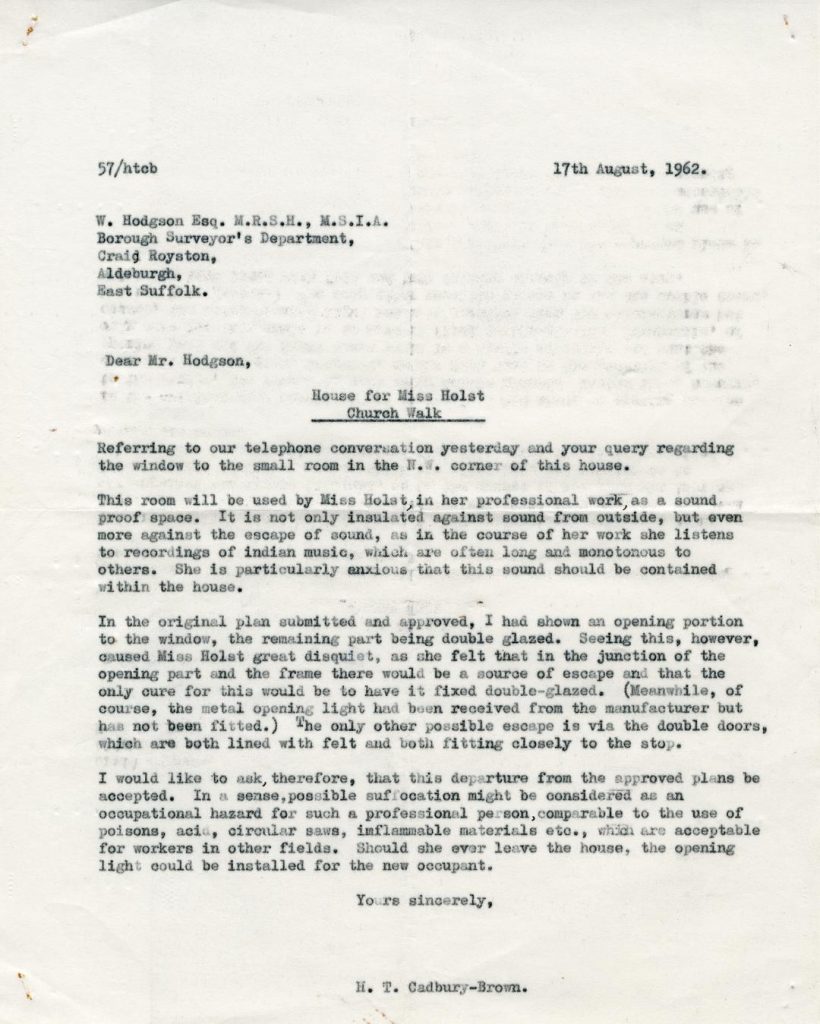 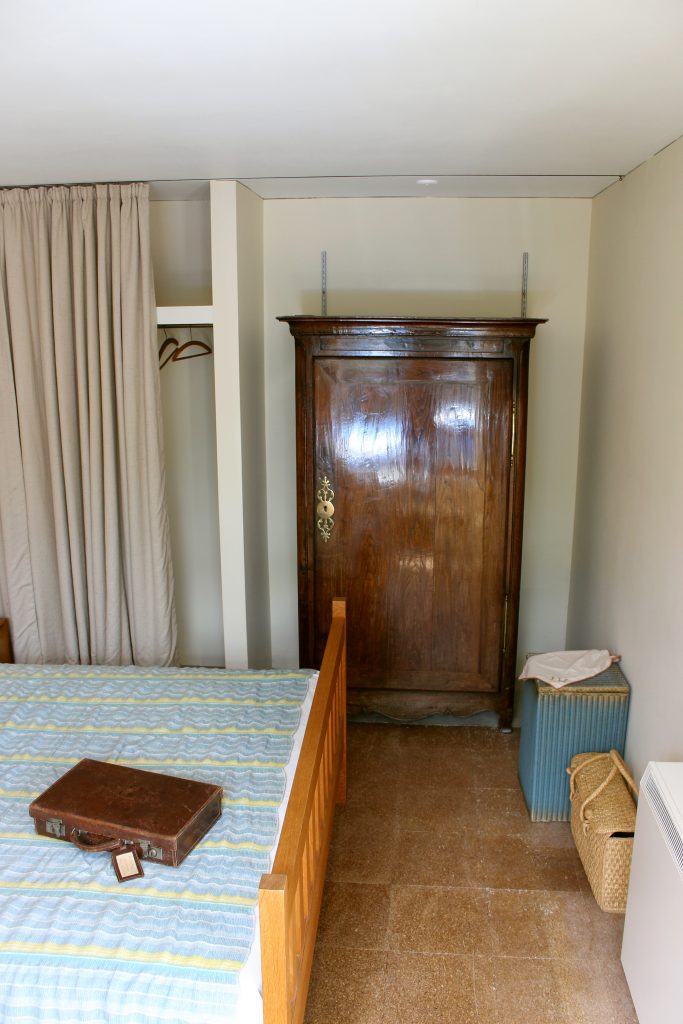 Includes an antique French chestnut wardrobe inherited by Imogen from her mother Isobel.